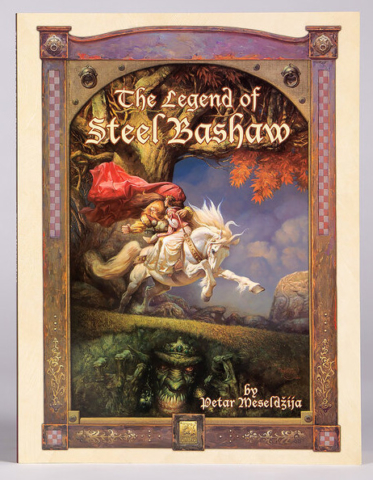 On the edge of a forest, almost as old as the mountains, they still tell a tale deep into the night.

The Legend of Steel Bashaw is Petar Meseldžija’s adaption of Baš Čelik, a Serbian folktale he first heard as a boy, it was given nightly life by Serbian storytellers illuminated by fireplaces and burning lamps. Built from the same impossible truths that the ancients used to craft all myths, this tale concerns itself with a kidnapped princess, the deeds of a heroic prince, battles lost or won, death and redemption. As with all the best stories, it also traverses lands real and imagined, ranging from the primeval forests of the Balkans to the kingdoms of the dragons and beyond.

But unlike most tellers of legends, Meseldžija knows there is a truth underlying this oft-told tale. He grew up with it and once held crumbling proof of that truth in his hands. It’s that experience which provided him with the main inspiration for this book, and it’s that same certain knowledge which informs every word and image in The Legend of Steel Bashaw.

Meseldžija has crafted a tale as vital as Beowulf, Homer’s Odyssey and the other great stories. His paintings bring his characters and their worlds to vivid life. The Legend of Steel Bashaw is his gift to the world, and it is a masterpiece.